Your Android device will most likely come with a storage capacity of 64GB or more, but it is the RAM that really affects what you can do with the phone. Most high-end Android devices ship with 2 GB or more of RAM, but some cheaper devices may have only 1 GB of RAM or even 512 MB in some cases.

Can you really increase the RAM capacity in your phone? Here’s how.

RAM  (Random Access Memory) ,  known as  the RAM , is a memory as an intermediary operating between the cache (Cache Memory) in the processor (CPU) and between the large volume, which may either be internal memory or external phone, your system uses RAM To temporarily store working parts of the operating system, portions of active applications, and data you use.

Why do you need more RAM?

To make it easier for you to picture your computer as your personal office, the internal memory will be more like the cupboard in which you keep your important files, the RAM will be more like the desktop you sit in front of it and it represents your work area that contains the documents that you are trying to complete, and the cache memory will be the part in which you put the document you are You are working on it at the moment, and it is the small part of the desktop where you place the document or file and start working and writing on it.

Imagine if we brought a larger office than before to work, you would be able to fetch more documents from the cabinet and put them on the desktop to work on without the desk becoming messy and untidy. This is similar to the fact that the more RAM you have on your computer, the more things (programs, applications and files) that you can access at the same time while you are working and quickly.

Is it possible to really increase the RAM of the phone?

The answer is yes. On your desktop or laptop computer, you can allocate part of your hard drive space to increase the RAM. This is known as “virtual memory” and on Android it is referred to as “swap file”. The principle of virtual memory is based on using a portion of the hard disk space to store data when the RAM becomes full. Instead of ignoring this data, it is stored on your drive.

Windows 10 has automatic advanced default memory management settings which means you don’t need to adjust the settings. But you can increase the portion of a dedicated hard disk drive or SSD that Windows 10 can use for virtual memory purposes.

The same can be done on Android to effectively increase the RAM. While the basic principle is the same, implementation on Android differs. You will need a dedicated program to make this possible. You will also need to root your device.

Although rooting is easier than it used to be, it can be a difficult process on some devices. But if you want to increase the RAM on your Android phone or tablet, it is necessary to root the device first.

What do you need to increase the RAM for Android phone?

While rooting Android is simple, it might not be enough. Some phones (like Xiaomi Redmi Note 4) limit the swap file size for the virtual memory. This means that there is a limit to more RAM on this device.

To save time checking if you can manually boost Android RAM, use the verification app. A good example of this is MemoryInfo & Swapfile Check.

Simply launch the application and click on Start RAMExpander Test to start verification. If the swap file size can be increased, the app will indicate this with a “Congratulations” message, along with the maximum possible increase. You will notice that this is a useful tool that also shows several RAM and storage details. 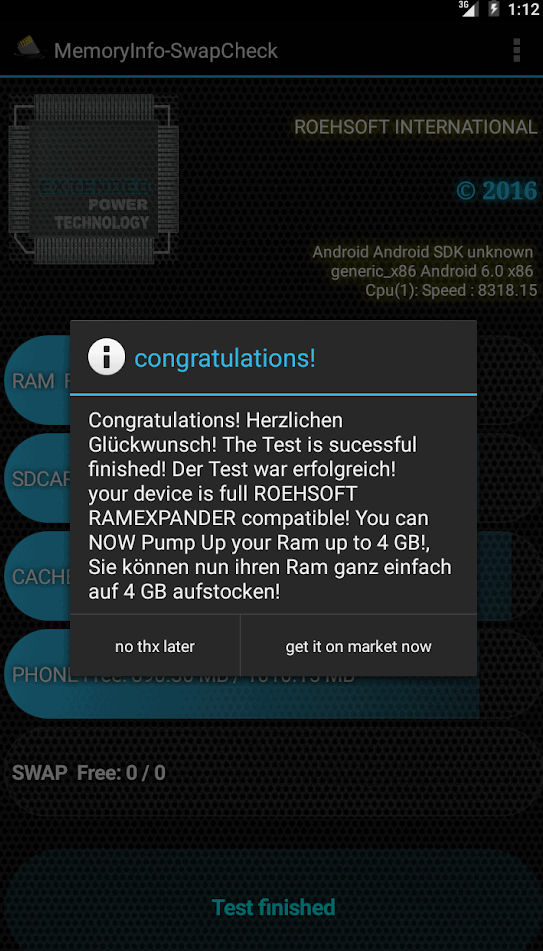 Choose with the best SD power to increase the RAM

If the swap file can be modified in your phone or tablet then it is time to look into your phone’s microSD card. This card should be fast and flexible.

Don’t just buy any old microSD card. Spend a little extra money on more flexible storage, which will lead to better reliability. Select the rating in the box when purchasing a new microSD card – minimum class 4 recommended, but class 10 best.

And be sure to watch out for fake microSD cards. Poor quality SD cards bring various defects to your Android phone.

Beware: Using an SD card to increase the RAM of Android device will reduce the life of the card.

It is important to note that some phones will not allow the use of external storage (your microSD card) for the swap file of the virtual memory. However, if your phone has enough internal storage, the internal memory can be used instead, but at the cost of likewise reducing its life.

Applications to increase RAM on Android

While it is possible to select the swap file manually on your Android device, you may find it easier to use an application:

Remember to leave the application installed as long as you need to run the swap file.

Does increasing RAM improve the performance of your Android device?

If you successfully allocate a portion of your phone’s SD card to the RAM, you should get immediate results. If you play mobile games, you must find that previously incompatible games will now play.

Further, the device will become more useful and productive. Of course, it is no match for real RAM. Whatever the speed of the SD memory, it is not close to the speed of RAM, but as an addition it will solve most of the problems of lack of RAM. However, there is a downside.

Now you need to monitor your volume. The volume is smaller than before after the swap file is allocated. With less space allotted for files and media, they will fill up faster than expected. Avoid this by keeping your data in sync, for example with cloud storage.