After it has been in use by more than a billion users a decade ago; Adobe officially announced the end of the Adobe Flash player era. The company decided to lift the subsidy from it at the beginning of 2021. The player that was once a major player in playing YouTube videos. Who doesn’t remember the flash games we enjoyed when we were kids? Adobe Flash Player has been a staple for playing videos, media and online games for a long time.

Why did it end?

Beginning of the End

We can say that the beginning of the downfall began when Adobe announced that it had no intention of developing the player for mobile devices. With the spread of smart devices and the popularity of iPhones, users of these devices suffered from the lack of a Flash player, which made some websites unusable. In 2010, Apple founder Steve Jobs attacked the operator, saying, “iPhones and iPads will never support Flash Player which has been full of years of bugs and security vulnerabilities.”

Although Flash played an important role in the early days of the Internet, it is getting out of date. With open web standards such as HTML5, it is now possible to embed content directly into web pages without the need for a Flash player. And because it does not support mobile devices, websites do not want to use Flash Player, because this means that they lose their mobile phone surfers.

With the popularity of the Adobe Flash player, it has always been a good target for hackers. The player has always been plagued by many security problems and software vulnerabilities. Because of that, his reputation was very bad and many people sought to get rid of him.

With the decline in Adobe Flash users and due to the abundance of security problems, Adobe announced its plan to stop supporting Flash three years ago. Finally the end day for the program came on December 31, 2020. While some operating systems and browsers have already discontinued Flash, Adobe encourages people to check that Flash Player has been uninstalled on their devices immediately “to help protect their systems”, because it will not get updates. Safety anymore. 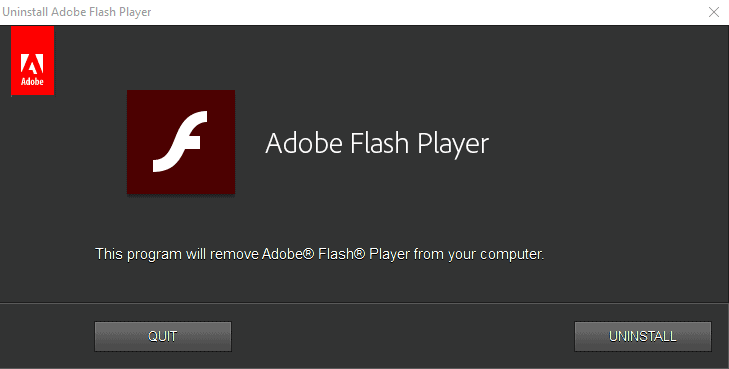 Remove the player from your computer

With support discontinued, the operator will no longer receive any security updates and fixes. So you should make sure to uninstall it immediately to protect your computer and your safety on the Internet.

In the summer of 2021, Microsoft plans to include the update in the monthly cumulative updates. That is, update KB4577586 will be downloaded and applied automatically with new builds of Windows.

The player is permanently removed

Adobe has published uninstall instructions for both Windows and Mac users. Here’s how to uninstall: