Last week, a copy of Windows appeared, which was said to be an incomplete leaked copy of Windows 11, which Microsoft is working on in its corridors of development. On June 24, Microsoft confirmed the news of its work on a new version of Windows under the name Windows 11, and yesterday, June 28, Microsoft announced the availability of its new system through the Windows Insider Preview Program, which allows developers and geeks to preview and test new versions of Windows before they are released. .

Windows 10 users can upgrade for free to Windows 11

At the moment, Windows 11 appears to be a free upgrade from Windows 10 for almost all users. This information is already confirmed in the Microsoft PC Health app, which displays the message:

Let’s check if this PC meets the system requirements. If so, you can get the free upgrade when available.

The good news is that upgrading from Windows 10 to Windows 11 is free. This has been confirmed by Microsoft and by the Microsoft PC Health Check app. But is your computer eligible to upgrade to Windows 11?

Microsoft has published on its website the minimum requirements for installing Windows 11, and they are as follows:

The official Microsoft Insider Preview blog outlines everything that can be found in the latest build of Windows 11, as well as a list of known issues with build 22000.51.

As we finalize the product over the coming months, we’ll work with you to verify a valid experience. You’ll be able to try out many of the new features we showed off last week in this early preview of the system, but not all of them. We’ll be bringing more features like chat with Microsoft Teams and Android apps to the Microsoft Store over the coming months because they’re ready for you – we’re just getting started on this journey together! – Microsoft

At this time, we recommend that you do not use the preview version of Windows 11 as a daily operating system. At least not now. Early versions of Windows 11 may be full of bugs and problems, there is also a chance of problems causing data loss. So signing up for Windows Insider Preview isn’t a decision you should make lightly, especially on any device you use on a daily basis.

Among the most prominent features that Microsoft presented at its conference for its new system:

Microsoft Store in the new update got a cool new design. The Store has been radically updated, with curved sliding menus that make it feel like an app store that you want to interact with more.

Microsoft has confirmed that to bring more of the apps that users demand to the Microsoft Store, programmers and developers will be able to use their own “payment methods”, which means that Microsoft won’t get paid if the developer puts their app in the Store in a way that appears to encourage developers to include their applications. This is likely a reference to Apple, which is still in the midst of an ongoing legal trial between it and Epic Games over its flat 30 percent fee for app transactions on its Store.

Android apps will work on Windows 11

Microsoft also revealed that Android apps will become available under Windows 11 directly through the new Microsoft Store. This step will enable Windows 11 users to install and access their Android apps, such as TikTok or Instagram, directly within the operating system without using emulators.

Android apps will arrive in Windows 11 via the Amazon App Store. Android apps will work on the operating system as with other apps, you will be able to pin them to the taskbar and open them alongside other windows.

In the new system Windows 11 Microsoft Teams will be integrated directly into the operating system, with better integration and faster access for Teams users this move may be the beginning of death for Skype. You’ll find full integration in the taskbar, allowing you to start new video calls or chats from a popup, with more features expected to arrive in the future.

Windows Snap Groups is a new feature that you can use to group apps to make them more accessible. Group a group of applications you use simultaneously in one group. Then, every time you want to use it, each app will reopen in the same screen location as before.

For many, this is a small advantage. But the value of this feature can be seen in the number of third-party apps that have previously appeared to offer this feature. Now, with the feature built into Windows 11, it should make using apps together much faster.

The Windows 11 Interests & Toolbar is one of the first new features that was revealed to Windows users, arriving in the Windows 10 taskbar in the June 2021 Update. Unfortunately, it was not well received, with many Windows 10 users choosing to turn off the News & Interests feature. Immediately.

The News & Interests app looks a lot better on Windows 11 than Windows 10. It’s obviously an app designed for the style of the new OS but was integrated into Windows 10 early on for testing.

Microsoft has made it clear that you can use the tool for more than just news and interests. For example, you can connect with and pay your favorite content creators directly from your desktop. The widgets currently include maps, news, weather, stocks, etc. (with cool live tiles), but expect more widgets to arrive in the future. 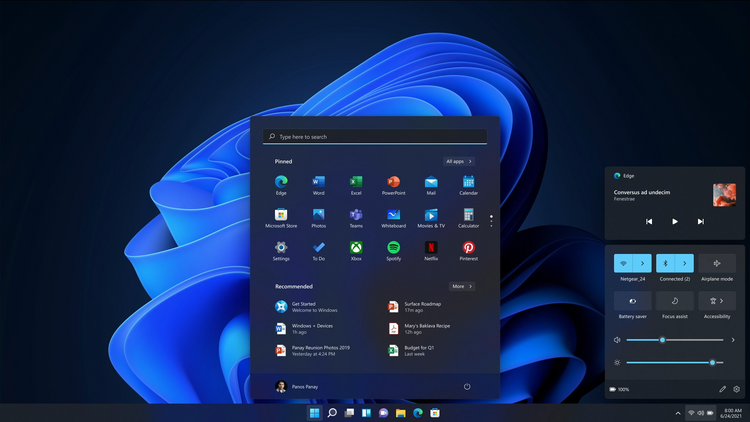 At Microsoft’s big “What’s Next for Windows” event on June 24, 2021, the company finally revealed Windows 11. Now, Windows 11 Insider Preview users can get the chance to download and install an official version of the new operating system directly from Microsoft.

Build 22000.51 of Windows 11 includes all the features revealed at last week’s Microsoft event, in addition to features we’ve already seen in the leaked version of Windows 11.

How to join the Windows Insider Program

You can join the Windows Insider Program to give yourself a chance to download and access Windows 11 early. There are a few important things to consider before you sign up for Windows 11 Insider Preview:

If you still want to join the Windows Insider Program:

Many Windows 11 users are finding it difficult to upgrade to the preview build through the Insider Program, even though their devices meet the minimum requirements for the new operating system.

Your PC does not meet the minimum hardware requirements for Windows 11. Your device may continue to receive Insider Preview builds until Windows 11 is generally available, at which time it is recommended that you reinstall Windows 10.

If you receive the above message while trying to install Windows 11 Preview build 22000.51, Microsoft recommends that you restart your system and check Windows Update for the latest update.

A difficulty for Microsoft and potential Windows 11 users is changes to the operating system’s minimum specifications, along with the currently supported list of Intel and AMD processors.

Windows 10 at its launch came with great support for older devices as Microsoft made sure to include support for the largest number of devices with the largest launch of its new operating system.

Now, Windows 11 has raised the bar for requirements. Of course many things can and will change between now and the official launch of Windows 11 later in 2021, so keep your eyes and ears open for any drastic tweaks to the preview program.