When you go to apply for an Internet subscription, you will make sure to choose the highest possible subscription speed. As a player, you think that’s all that matters. Not many ISPs will tell you that speed isn’t really everything. The quality of a service provider isn’t just measured by the speeds that it offers. Of course, speed is not all that matters to you as a player.

What is ping? What is latency? What is packet loss? What do we mean by lag? What are its causes? How do all these names affect the online gaming experience? We will discuss all these details in our next article.

They represent the same thing. We can define ping (or latency) simply as “latency.” In other words, it is the speed at which a command is sent to the game server and has the game (or its server) apply the command and display what happened.

Let’s explain it in more detail. When you start playing on your computer and while you are playing, you make a movement on your computer, such as jumping, for example. A command is sent from your computer to the game’s server that the player has made the jump. The jump command is applied directly to the hosting server as soon as it receives it, and then it sends the rest of the players information that you have jumped to show your jump on their computers. Ping is measured in milliseconds (ms). When we say that your ping is 80ms, this means that after you jump in the game, it takes 80 milliseconds to send the command from your computer to the game’s host server. Other players will see your jump after 80 milliseconds plus their own travel time.

How does ping affect your gaming experience?

As we said before, ping is the time it takes to send a packet of data (your in-game actions such as movement or attacks) to the game’s host server. The server is processing this request. At the same time, the server must also process other players’ actions toward you and send this information back to your computer.

How is ping affected?

Many factors affecting the increase in ping are beyond the user’s control. This includes the physical distance between the game server and the player’s machine. With similar conditions for two players, a player 10 miles from the server will have better latency than another 100 miles from the server. This is why game companies strive to provide servers around the world. You find PUBG, for example, running servers in Asia, Europe, North America, the Middle East, and other parts of the world.

Other internet use on your same network also leads to higher ping. Is someone playing Twitch broadcasts? Is a user downloading the latest Fortnite update? Is a family member watching Netflix? All this creates network noise and users all compete for bandwidth to flow data in or out of the network.

The third factor is something that surprises many people. All internet plans provide home customers and most business plans provide internet over a shared connection. Imagine a large cable running into a city. It splits into each neighborhood, and continues to split several times into smaller tubes serving specific streets or blocks, and ultimately individual buildings, companies, or residences. Each node acts as a potential bottleneck if another person – a person or a company – is draining the bandwidth. The result is that even if the internet provider advertises a certain speed, there is no guarantee that the customer will actually get that speed – especially during peak times. This is not acceptable for a professional player or esports champion.

The final reason is network quality and connection quality. Of course, you, as a user, do not know about the quality of the cables and connection exchanges that take your subscription from them. The cable running inside your home from your internet device to your computer may already be of poor quality. This also varies with the type of connection. Of course, Fiber subscriptions provide faster and better transmission times than VDSL or ADSL subscriptions.

What is a good ping rate for games?

Ping over 150ms will cause noticeable lag, and this will definitely affect gameplay, graphics, and the ability to stream a watchable to Twitch. Anything less than that should be fine. A ping rate of less than 50ms is ideal and in demand for professional gamers.

What is packet loss?

As we previously boasted, the moves you make in-game are sent in packages to the game’s server to be applied. After your packet moves out of the game from your computer and before it reaches the server and somewhere between you, the connection is disrupted and ends up losing part of the packet and not reaching the server. This is what we call packet loss.

Packet loss is usually measured in percentage. For example, suppose you at one point have a packet loss of 2% and suppose you send out a packet with 100 actions that you performed in the game. This means that the server has actually reached 98 procedures out of the 100 and 2 did not arrive. The server does not know what the procedures are, and they will not be applied. This leads to a bad experience while playing it.

How is gaming experience affected by packet loss?

When you encounter packet loss issues while playing, you will experience slower transfer speeds. Things end with a game that gets late or freezes. You may be completely kicked out of the game and find yourself unable to re-enter. Or your connection drops a lot, you stay in the match but don’t do anything. It is probably worse to stay in a game that you can’t play than to get kicked out of it.

Another problem is when you are in the middle of your game and then all of a sudden the players disappear from the screen and return to a different location. You may have missed the perfect shot or the best opportunity to attack your opponents. With lost beams, when you try to play a first-person shooter, you might notice that your aim looks perfect, and yet your bullets don’t hit the target.

Packet loss is a real common enemy of gamers. Nothing is more frustrating than experiencing a poor connection while you play. Every fraction of a second counts, and you could end up losing the match because your communication jumbled up sending you halfway through the map between your enemies.

It may be a problem with the Internet service provider or the connection cable, or your computer may be too far from the game server, so it takes a long time to transfer your package from your computer to the server, and your data is lost while it does not pass.

But then again, it could be an issue somewhere in the middle, as the game’s servers are too crowded with other players’ packet traffic. The more players use the server to play, the higher the chance that you will experience packet loss. 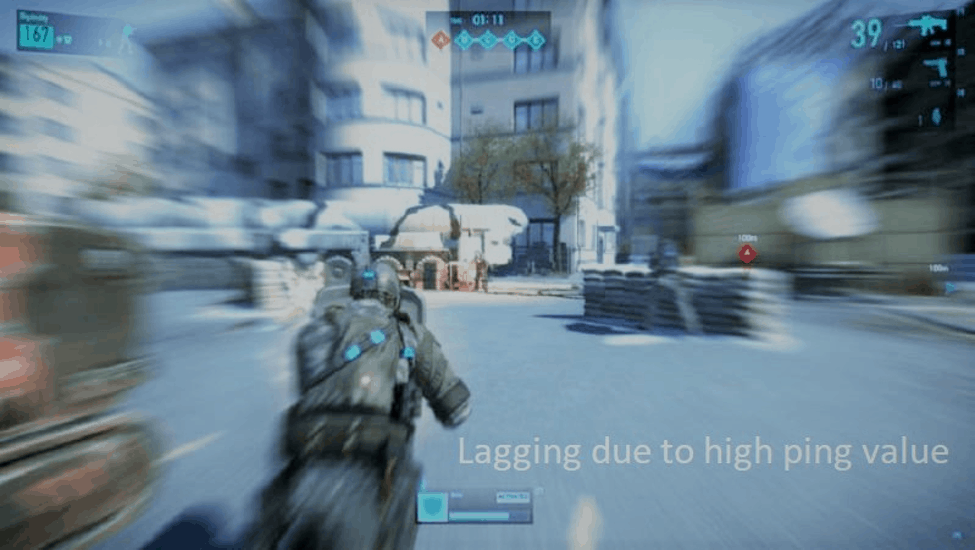 Often the lag (lag) occurs due to high ping and / or low speed internet connection. That is, the time you are playing the game and your commands arrive with a delay. For example, you press W to advance in Counter-Strike, but your character only moves after a second.

Sometimes lag can build up, so the game will apparently freeze for a few moments, then suddenly catch all of your inputs at once, or disconnect you from the game altogether.

Players can experience being late for several reasons, the main one being the high level of Ping, as your commands are sent to the game late. Sometimes the problem is instead due to unstable connections, as your device will be periodically disconnected and reconnected to the Internet, this is called packet loss and it occurs when the information that you send to the server is not received in packets. This could be due to server congestion, low security, or internet connection interruption.

What is the solution to the problem of these problems?

The best solution is to change your Internet Service Provider (ISP) to one with better service and better infrastructure. If you are a professional ADSL player and can afford to migrate to VDSL or even Fiber then do not hesitate to do so. Try to improve the internal network in your home by using high quality cables. Use an Ethernet cable to provide your computer with the Internet and keep you from Wi-Fi.

Check if anyone else is on the same network as yours and if they are using “web heavy” services like streaming platforms on YouTube, Netflix or Twitch. If you have a low speed internet connection, avoid playing online at the same time with other users in the house.

When using a Wi-Fi network, make sure your computer or phone is not too far from the router. The closer to the router, the better. And make sure to stop programs running in the background while you are playing. If you use mobile networks, ensure good coverage of the network and use booster devices if possible. Switch to 4G services instead of 3G and, if possible, 5G. The 5G technology has superb response speeds and low Ping along with high speed.

Update your computer’s network card drivers and release the router’s freamware, and make sure you have high-quality, modern Internet and Wi-Fi devices. Also, make sure to update the game regularly with each update coming out to solve problems in previous versions and avoid beta versions of the games.

Gaming VPNs are a great solution to help prevent packet loss in the event that the internet in your country is bad. These tools are designed to help reduce the lag you face while using real-time applications such as video games. One of these services is the Haste Pro program. Haste Pro sends packets through four different paths, so even if you lose one packet while sending, the rest will reach the server. This results in a more stable connection while playing so you don’t end up freezing at that crucial moment in the game.